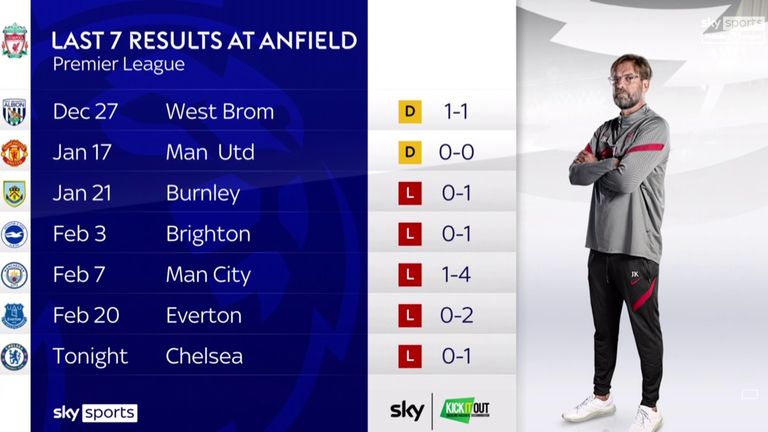 Thomas Tuchel’s side dominated the first half and thought they had scored through Timo Werner in the 24th minute, but the goal was ruled out by VAR after an extremely tight offside call.

However, Chelsea’s dominance did eventually pay off when Mount fired past Alisson to give the visitors a deserved lead.

Liverpool showed more urgency after the break, but they struggled to find their fluency in attack and failed to create many clear-cut chances as Chelsea held on for what could prove to be a crucial three points in the race for Champions League qualification.

Victory sees Chelsea, who continue their unbeaten start to life under Tuchel, move up to fourth in the Premier League table ahead of another crucial game at home to Everton on Monday (kick-off 6pm).

Meanwhile, Liverpool’s difficult season continues as Jurgen Klopp’s side, who stay seventh – four points behind Chelsea – go into the record books for the wrong reason after a fifth straight home defeat.

5 – Liverpool have lost five consecutive home games (league and all comps) for the first time in their history, while they’re also the first reigning English top-flight champion to lose five home league games in a row. Nosedive. pic.twitter.com/Rg25S3pmC0

How Liverpool lost again at Anfield…

Chelsea enjoyed the better of opening exchanges and they created the first real opening as Werner beat the offside trap, but he couldn’t lift the ball over Alisson, who made a comfortable save.

Tuchel said before the game they would be looking to exploit Liverpool’s high line with Werner’s pace, and they thought the plan had paid off when Werner once again raced in behind the home defence to latch onto Jorginho’s pass.

Man of the match: Andreas Christensen.

The German beat Alisson, who was in no man’s land, to the ball, and fired home into an empty net, but after a VAR check, the goal was ruled out with Werner’s arm adjudged to have been offside.

Liverpool responded well after their VAR reprieve and Sadio Mane should have done better when picked out by Mohamed Salah, but the Senegal forward missed his kick with the goal at his mercy.

It was the visitors, though, who got the breakthrough they had been threatening just before half-time when N’Golo Kante’s direct pass out to the left wing picked out Mount, and he cut inside Fabinho to drill a fine finish past Alisson and into the bottom corner.

After the break, Liverpool looked livelier. There were strong appeals from the home players for a penalty when Roberto Firmino’s cross hit the raised arm of Kante from close range, but the referee waved away the appeals and VAR saw no reason to overturn the decision.

READ  6 companies that filed for bankruptcy in May

Andy Robertson cleared off the line from Hakim Ziyech after Alisson parried Ben Chilwell’s shot as Chelsea continued to threaten.

Klopp looked to his bench just past the hour mark bringing on Diogo Jota for his first appearance in three months and Alex Oxlade-Chamberlain, but eyebrows were raised when Salah – the Premier League’s top goalscorer – made way.

However, Liverpool still struggled to create anything of note, while at the other end, Werner, was doing everything but score as Alisson’s leg saved another shot from the German.

The hosts eventually registered a shot on target in the 85th minute, but Georginio Wijnaldum’s weak header was easily saved by Edouard Mendy.

Chelsea’s well-drilled defence got them over the line as the champions ran out of ideas.

“It’s a great result for Chelsea, it really is. Thomas Tuchel has made a fantastic start to his career at the club. He’s come in on an 18-month contract and it felt like he had to get this club into the top four in his first few months. They are in that position now.

“Mason Mount was outstanding for the visitors. There was a lot of talk about him being on the bench in Tuchel’s first game, but I’m sure Tuchel is aware of how important he will be, not just this season but in the years to come for Chelsea.

“It really is a big result. You can see that from the reaction of the players. It’s not just about where it puts them now but psychologically it will bring huge belief to this club and it sends a warning to the Premier League that they will be difficult to shift out of the top four now.

“They look a really good outfit and deserved this result.”

He has now scored 12 and assisted eight goals in the Premier League for Chelsea.

Aged 22 years and 53 days, he’s the second-youngest player to reach 20 goals and assists for the club in the Premier League after only Arjen Robben (21 years and 337 days).

Carra and Redknapp on Liverpool struggles…

What the managers said…

Liverpool boss Jurgen Klopp: “The individual quality of Mason Mount in that moment made the difference. It was a tight game, intense game. Both teams invested a lot. That is it pretty much. They had the goal they scored which was offside. The second half another counter-attack, we had more situations around, the great one with Sadio Mane and other situations where we did not score.

“You have to defend differently and we didn’t do well there. There are a lot of things out there you have to consider. In the end, we conceded one goal, we made the mistake there, the other was offside and you can say it was good defending but with all the possession we had you need to have more chances. Everything was really good until the final pass.

“Unfortunately we cannot say it is only at home. It is not about Anfield or whatever, it is in general, too often. In the decisive moments we have to improve. We have to show our quality in these moments and we don’t do that often enough.

On Salah’s substitution: “I just brought on fresh legs. Mo (Salah) looked like today he suffered a bit, he played a lot of games. I could have taken off Sadio or Bobby, that is all clear but at that moment it looked like Mo. Milner we bought on to wake them up a bit and keep them in the game because we needed one situation.

On the race for the top four: “It is a massive blow. It is not done yet. We have to win football games.”

Chelsea boss Thomas Tuchel: “We had excellent moments with the ball, we had moments where we needed to suffer but we never lost the attitude to defend, we never lost the discipline, attitude, desire or courage to defend up front. It was a well-deserved win with a big performance and a big result.

“When you play at Anfield, you cannot overthink, you have no time to think so we told the players ‘we need your best performance, but we need nothing extra or super special’. But the things we did today, we need to do them at the highest level with position and passing and distances where we want the ball. We need to be courageous if we want to escape the pressure and we did this excellently. It was a very good team performance and I’m absolutely happy because it’s a deserved win.”

“We knew that when we arrived here, we need to be top in all situations of the game. They ask you a lot of questions and you need to have the answers.

On Chelsea’s top-four chances: “It’s a six-point game because at the same time, when you win, the others lose. But the race is on, there are still 11 games to go. We go step-by-step, there is no other way to prepare every match that is coming, the next one is the next tough one, also against a direct opponent for the top four. It’s good because we can never rest, we can never celebrate and be happy for too long because there is no time for that.

“I feel as a part of this group, I feel like a big part of the club actually from the first moments and we put in all our effort and try to help and do this in the best way possible. We are happy when the team shows their quality and I’m delighted to be a part of it.”

Man of the match – Andreas Christensen

2 – Chelsea have conceded only two goals in 10 games in all competitions under Thomas Tuchel, the same return as they had after 10 games under José Mourinho – both managers’ 10th game was a 1-0 win against Liverpool. Mastered. pic.twitter.com/Pv2khayfvk

Sky Sports‘ Jamie Carragher: “It was a toss-up between Andreas Christensen and Mason Mount, but I’ve gone with Christensen.

“He defended really well in the second half and he was extremely brave in taking the ball in really difficult positions. He was really composed on the ball.

“He was a standout performer for Chelsea against a Liverpool side that struggled to create anything of note.”

55% – Édouard Mendy has kept 12 clean sheets in 22 Premier League starts (55%); of the 210 goalkeepers to have started at least 10 games in the competition, he is the only one to keep a clean sheet in over half. Force. pic.twitter.com/zeOJCa5y2r

Liverpool are back in action on Super Sunday when they host Fulham, live on Sky Sports Premier League from 1pm; Kick-off 2pm.

Meanwhile, Chelsea face another top-four rival in their next game when they host Everton at Stamford Bridge on Monday; Kick-off 6pm. 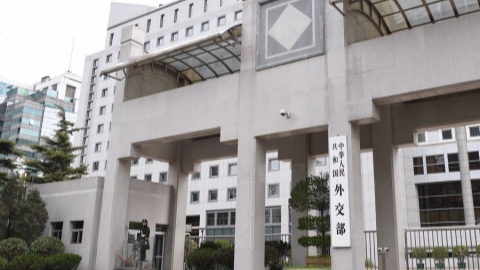 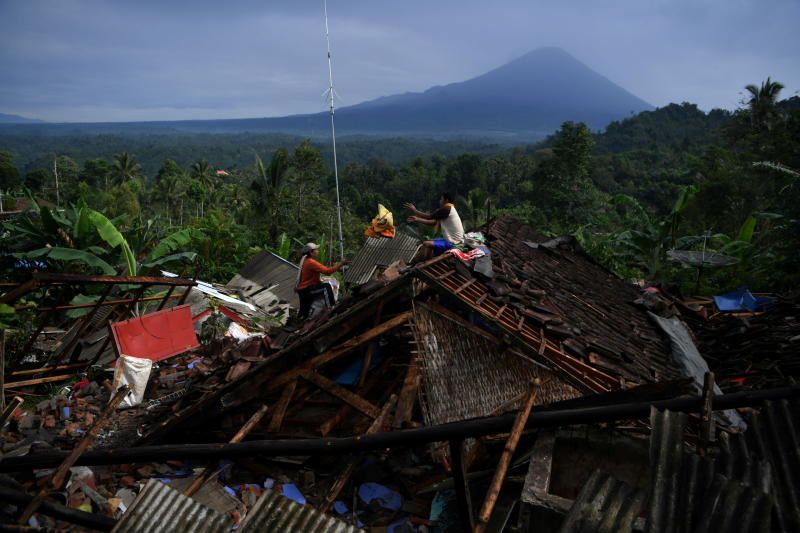